cancel confirm NSFW Votes: (0 votes)
Are you the publisher? Claim or contact us about this channel.
0
Showing article 959 of 977 in channel 12015318
Channel Details:
Viewing all articles
Browse latest Browse all 977
0
0

There is certainly pride and beauty in our traditional forms of greetings that are obviously still practice on the continent, and these contrast sharply with the new greeting modes, which are increasingly becoming popular. The diversity of colours, races and language, with their attendant difference in art forms and expressions, is no doubt one of nature’s methods of spicing the life of man.

In spite of some cultural similarities among some races, each race still has some unique cultural traits that serve to differentiate it from other races, near or far. Culture manifests in the way and manner a particular people live their lives. The kinds of food they eat, the kind of dresses they wear, the major occupations in which they engage, and the kinds of tools they use, the kinds of festivals they celebrate, and the belief system surrounding such festivals, the pattern of social relationship within and outside the family, the communication pattern and the unique artistic expressions therein, are all parts of culture. Specifically, the way and manner in which they greet each other is the prime focus here. 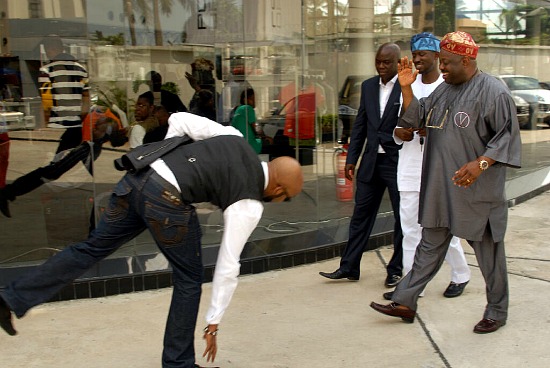 Nigeria, with its multi ethnic environment presents an interesting example of this. For instance, among the traditional Yoruba of Nigeria, a young person (man) who is greeting an elder would have to prostrate on the floor to do so. His two hands are stretched forward with his feet supporting him from behind, such that he only manages to prevent his belly from touching the floor. Such young person may then retreat and sit on the floor in the event of having to discuss with the elder. In the process of this discussion, according to our source, the young dare not look into the face of the elder. In that sitting position, he would continue to bow his head intermittently in appreciation of the elders’ statement. As soon as the discussion is over, he prostrates all over again to offer the post-utterance greeting. It is noteworthy that he (the young man) is forbidden from offering a handshake with the elder. Unless otherwise, the elder offers the handshake, which the young person would hesitate to accept. In some cases, a Yoruba elder may choose to prevent the young one from prostrating. In this case, he would quickly grab the young person and pull him up to himself. Thereafter, the elder offers a handshake or may even embrace him. What is important is that the tradition among the Yoruba forbids the young from offering a handshake, or even waving an elder from afar. If you are near, you must prostrate, and if you are far, you must bow your head. This is among the men within the Yoruba. A young man should also prostrate or bow to greet older women, as the case may be.

We should note that elder, as used here does not necessarily mean one who is very old. It means one who is older than the other by such a margin, that he cannot be said to fall within his age group.

In the case of women, she is expected to bow down with her two knees placed on the ground to greet an elder, be it a man or a woman like her.

Among the Hausas of the northern Nigeria, 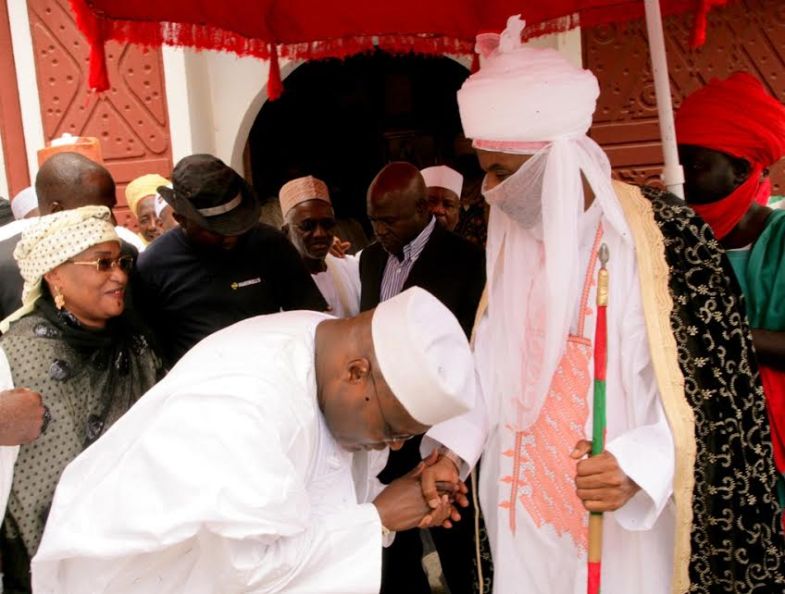 greeting patterns also depend on the age and social status of the person with whom one is interacting. Just as with the Yoruba, men or boys of the same age group can stand apart and greet each other “ina kwa na” in the morning. According to one source, the traditional Hausa before the coming of Islam bows his head to greet an elder. This is particularly when men are involved. However Islam considers bowing of the head as “Ruku’u” which should only be done to the Almighty in the process of observing any of the five daily prayers.

However, the traditional Hausa still consider it necessary to squat while greeting an elder. It is important to know that among the Hausa race too, tradition forbids a younger person from offering a handshake to an elder, i.e. one who is older than him. Except, of course the elder chooses to offer him a handshake, which he would hesitate to receive. All these are marks of respect, which is a highly cherished tradition among the Africans. The Hausa woman in the traditional sense would stay afar and place her two knees on the floor to greet an elder, be it her relation, in-law or a non-family member.

The same thing obtains in the traditional Igbo community. Be it man or woman, one who is greeting an elder squat to do so. And with his local fan, he taps the back of the young and calls for God’s blessings upon him or her.

Among the royal group, the Igbos have a unique manner of greeting, which interestingly sets them apart from others. Among the royal men, two persons involved in an exchange of pleasantries do so by tapping the back of their right palm against the other, three times, and finally tapping the palm against each other aloud. Sometime the individuals involved may choose to firmly hold each other’s palm, while the pleasantry lasts.

In the case of an ordinary elder exchanging greetings with a chief, such chief may choose to tap the back of the elders palms with his local fan, also three times and finally, once with the palm front.

This same respect is found in every other Nigerian group, and indeed, African cultural setting. However, it seems that urbanisation and western civilisation have eaten deep into the fabric of this highly cherished tradition of greetings. Only in the typical African village setting could one still observe this pattern of greeting. At the city centre, they are fading out fast. Rather than waiting for the elder to offer a handshake, the younger person considers it normal nowadays to offer his own hand first to the elder, and that, is if he chooses to greet the elder at all!