cancel confirm NSFW Votes: (0 votes)
Are you the publisher? Claim or contact us about this channel.
0
Showing article 512 of 977 in channel 12015318
Channel Details:
Viewing all articles
Browse latest Browse all 977
0
0

Need to melt fat away? Do this fun, 30-minute routine three times a week, using a stability ball. 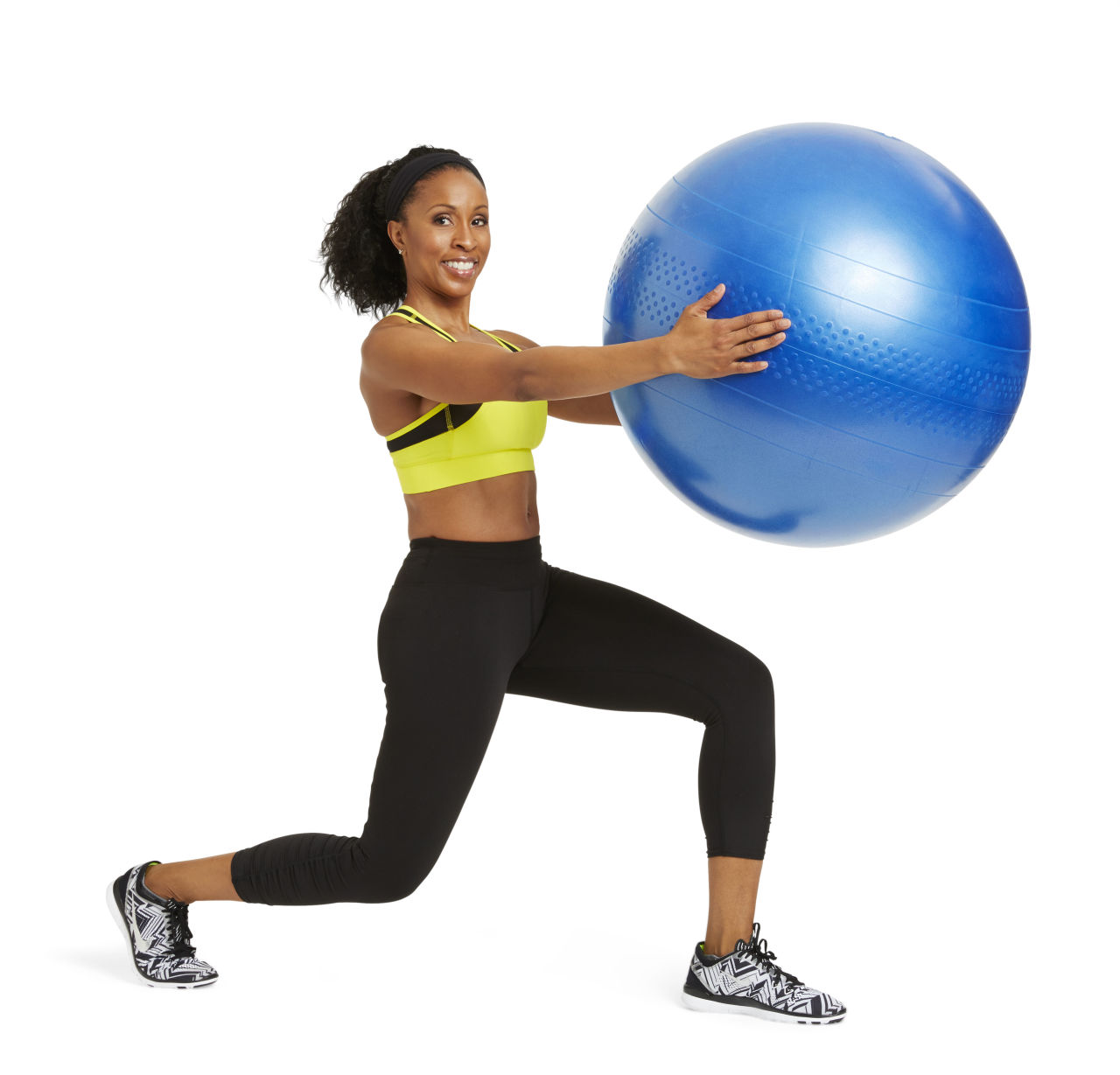 TRY IT: Squeeze ball between palms for added upper-body sculpting. 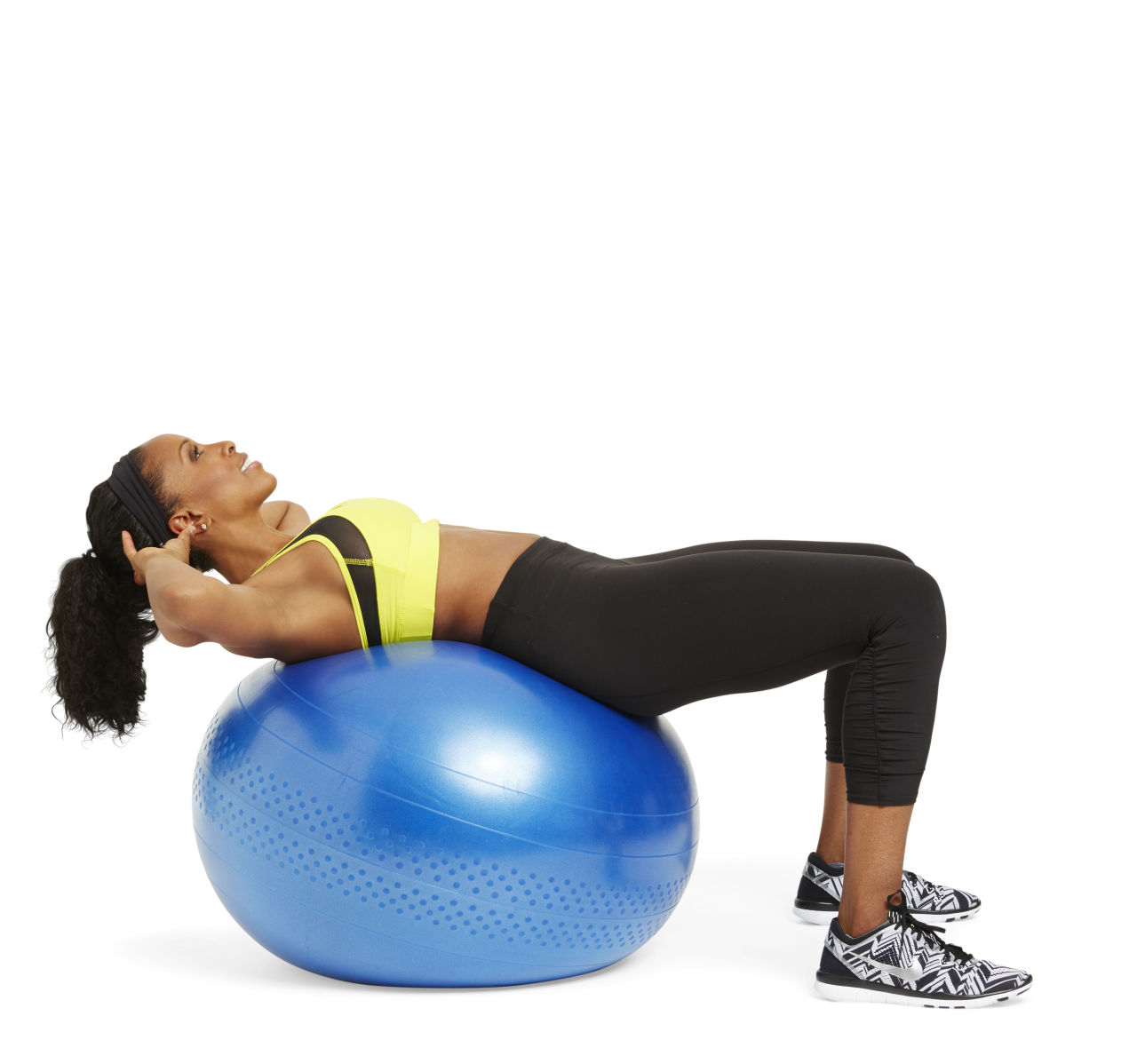 Works abs
Lie with middle of back on ball, hands behind head, elbows out, feet flat on floor and knees bent 90 degrees. Keeping neck relaxed, contract abs and curl up until head is in line with shoulders (above). Return to start. Do 12. reps.

TRY IT: Once you feel your abs engage, stop. That’s the sweet spot. This is a subtle move — no need to pull yourself up into a full sit-up. 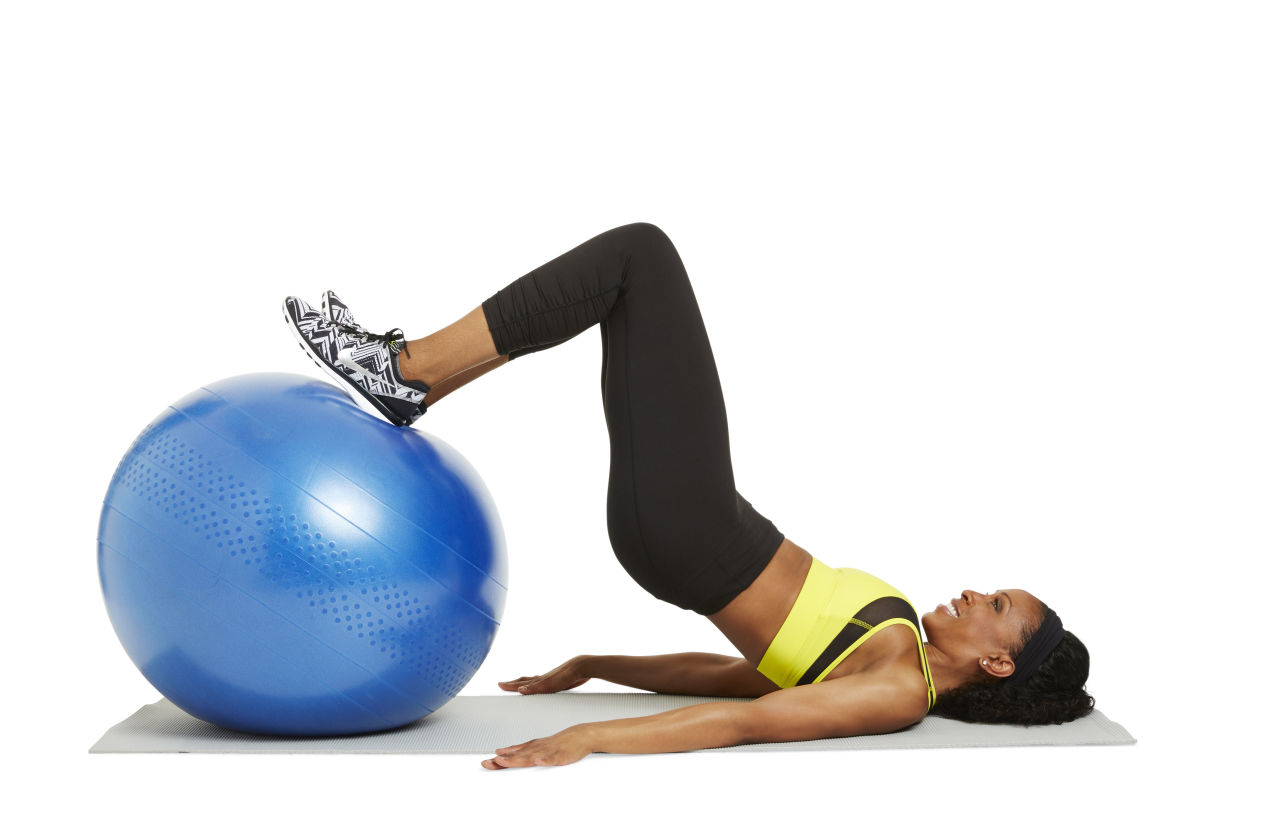 Works hamstrings, butt, thighs
Lie faceup on the floor with legs straight, heels resting on top of ball, arms by sides, palms flat. Squeeze glutes and raise hips until body forms a straight line. Bend knees and dig in heels to roll ball toward you (shown above). Straighten legs to roll back to start. That’s one rep; do 12.

TRY IT: Invite your abs to the party! Actively pull your navel in toward your spine throughout — it will help prevent your hips from drooping. 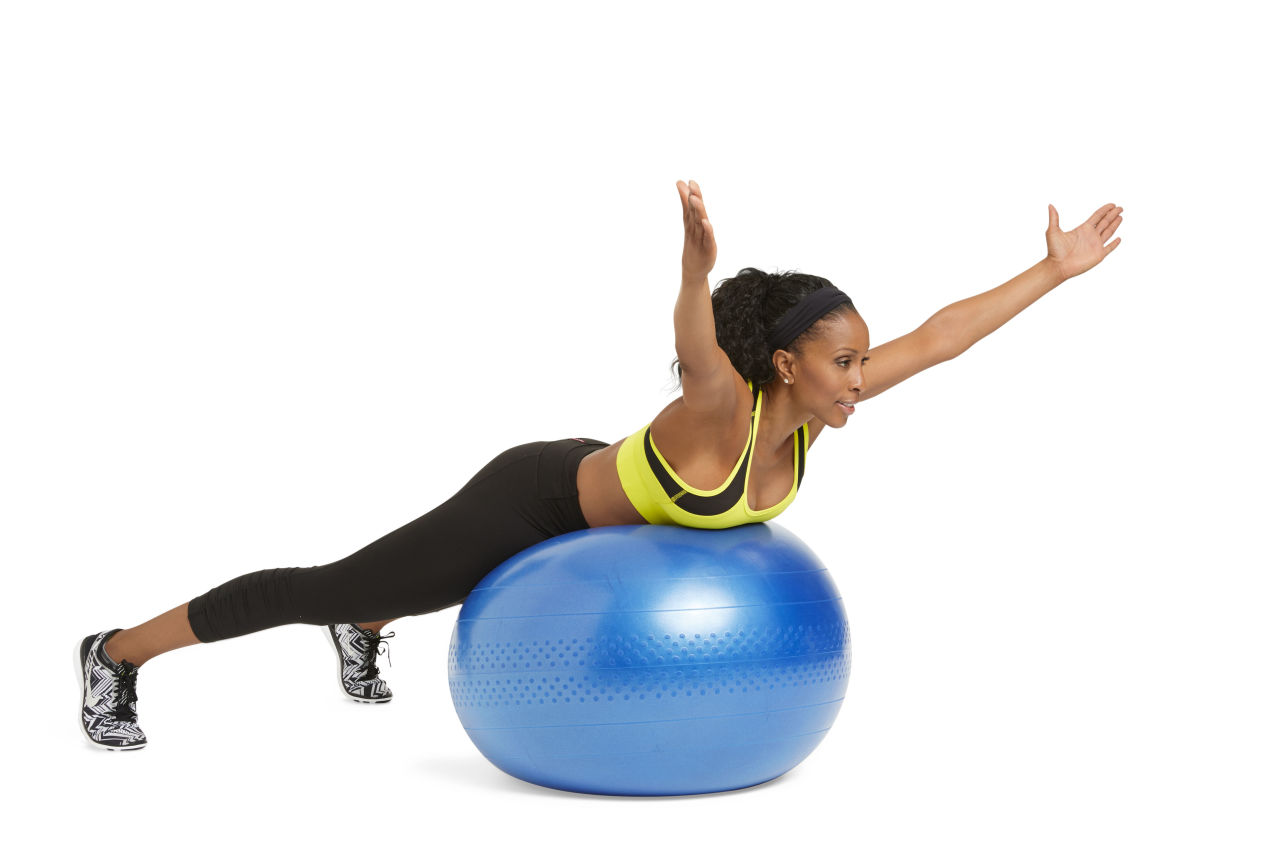 Works back, shoulders
Lie facedown on ball with legs extended behind you and arms outstretched to form the letter “Y” (shown above). Lower arms to sides, then bring them up to shoulder height, now forming a “T.” Lower arms to sides again, then stretch them back, keeping elbows straight, to make a “W.” Move through all three positions 12 times.

TRY IT: Stretch arms as straight as you can, and hold each letter for two seconds. 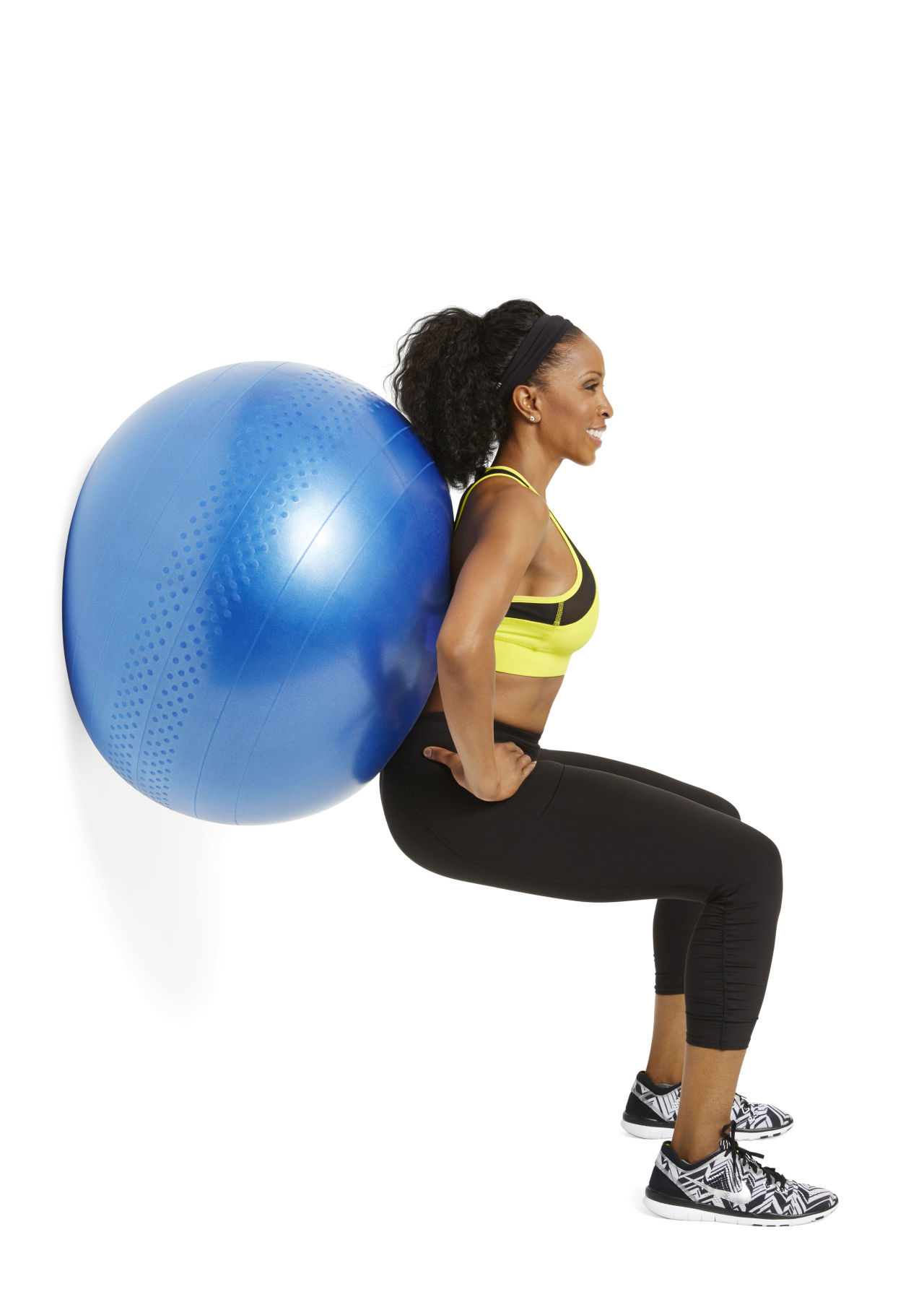 Works butt, thighs
Stand with feet hip-width apart, ball pressed by lower back against wall, hands on hips. Slowly roll down wall into a squat until thighs are parallel to the floor (shown above). Return to standing. Do 12 reps.

TRY IT: The ball is like a spotter. It will help you guid the movement, letting you sink more deeply (and easily!) into the squat. 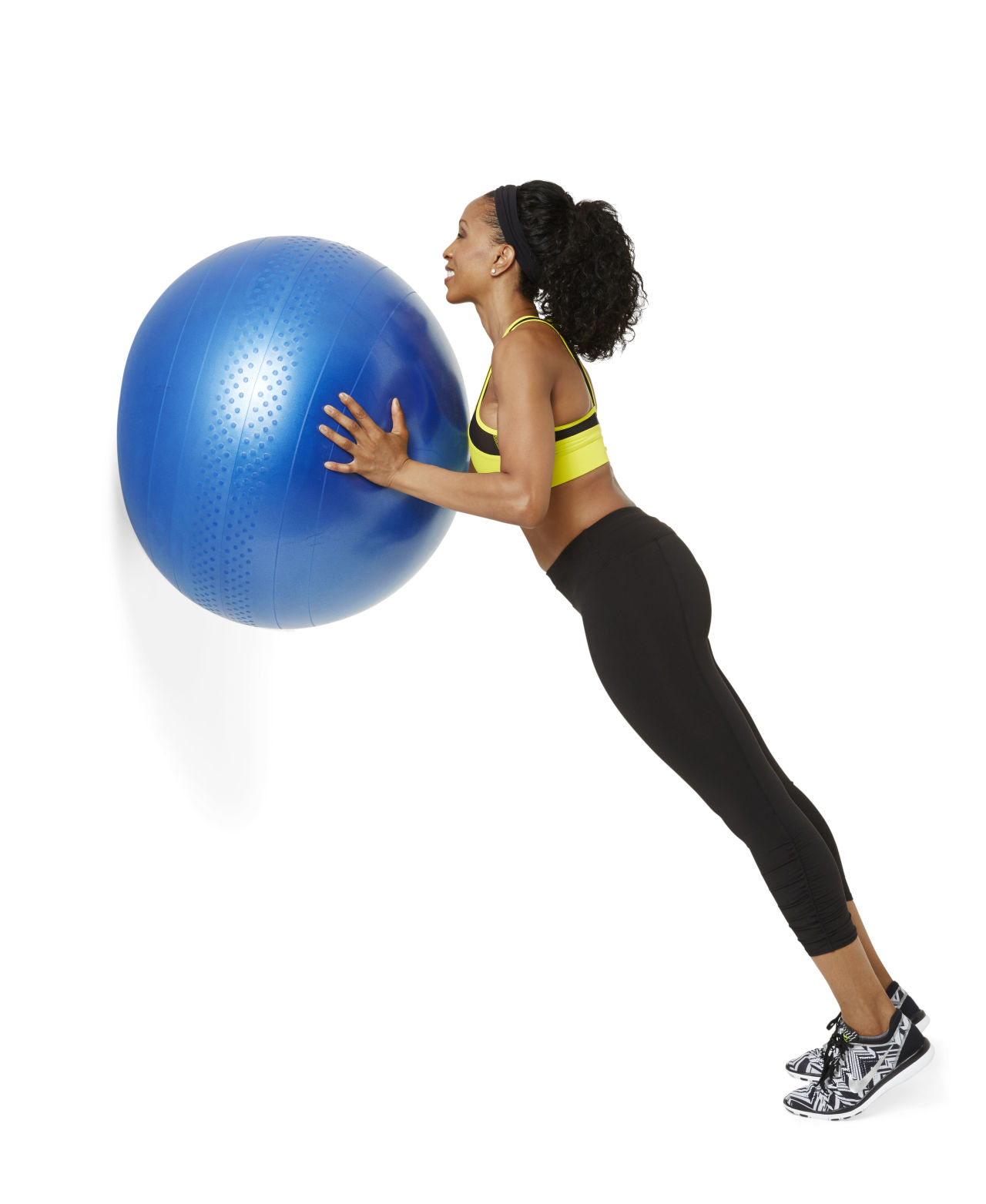 Works chest, shoulders, triceps, biceps
Hold ball against wall at chest level. Step back until arms extend fully, keeping body straight from head to heels. Bend elbows and move toward ball until chest touches it (above). Pause, then push back to start. Do 12 reps.

TRY IT: A wider stance makes the move easier.